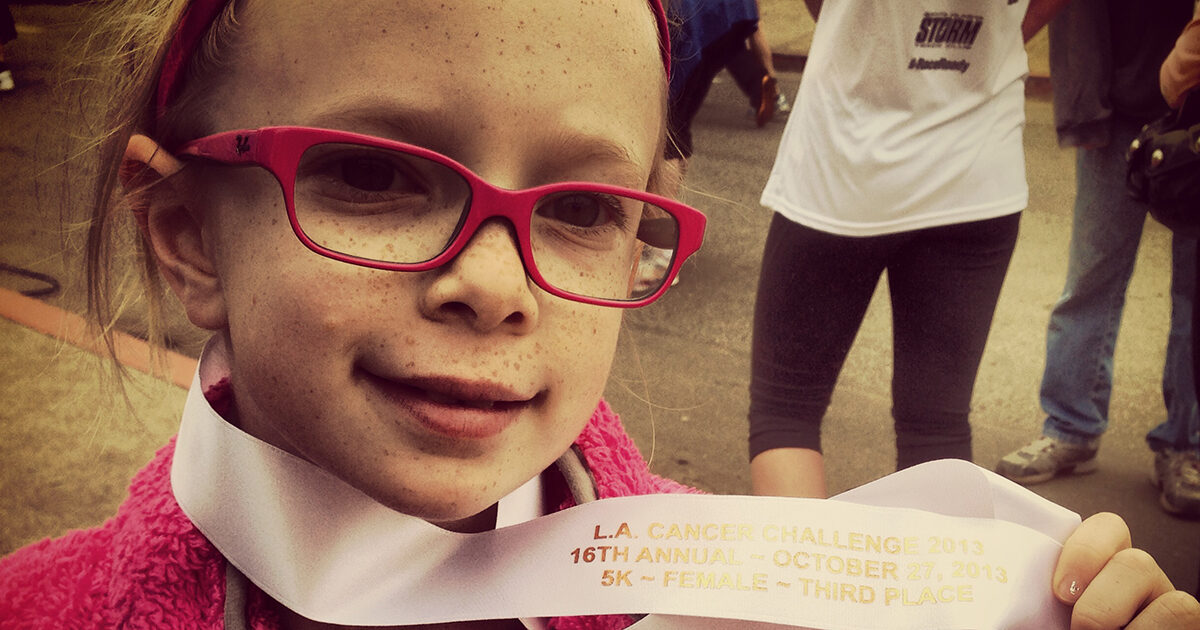 The LA Cancer Challenge has been a part of my family’s lives for the last 11 years. When our friend Mark was diagnosed in 2002 we raced in support. Since he succumbed to the disease, we’ve raced to remember. The race had become a proud yearly tradition. Slowly, we’ve become more involved and have gotten to know so many people in the Hirshberg organization. The 2013 event will forever hold a special place in my heart. The day after the 2012 LA Cancer Challenge my daughter Maggie decided to get into the race that she had watched from the sideline for the first 7 years of her life. I’m a runner – it is one thing I can say I’m good at doing. Now I was going to get a chance to run with my daughter, what could be better? Obviously when thinking about an 8-year old, “running” is a little strong of a word. I expected her first 5k to involve running, walking and skipping.   Before our first training session, I sat Maggie down and talked about her goals (and mine).

My rules were simple: 1)If anything hurts, stop! 2) Always have fun and 3) Go at your own pace.

That day we ran around the block ONCE. Over the next ten months, the mileage grew slightly (our longest run was 2.65 miles). We experimented with a few different motivational systems. We tried jelly beans, PEZ, mints… The memories from our training sessions are countless.   The good, the bad and the ugly all blended together.

On race day I had no idea what would happen. Maggie never realized she would be running with thousands of other people, so she was a little intimidated. While I pushed her brother in the jog stroller on one side and she grabbed onto her mom’s hand on the other, we started up the “big hill” from the starting line. Maggie kept it simple…..left, right, left, right…..inhale, exhale…..repeat.

We ended with an official time 34:51. Good enough for 3rd Place in the 0-9 girls division!!! Four days later the medal has finally come off. However, the memory will last forever and October, 26th 2014 can’t come soon enough.