Home / About the Foundation / About Us / Scientific Advisory Board / Oscar Joe Hines, MD 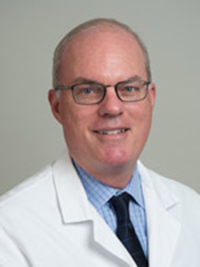 Dr. Joe Hines is Chief of the Division of General Surgery at UCLA. He attended the University of Oklahoma before completing residency training at UCLA, where he has served as a professor of surgery since 1997. Dr. Hines is a nationally renowned scholar in the areas of pancreatic surgery, complex abdominal surgery, and advanced laparoscopic surgery. He is a member of numerous professional societies, most notably the elite American Surgical Association and the Society for Clinical Surgery. He is a Governor of the American College of Surgeons and former president of the Society of University Surgeons.

A true master surgeon, Dr. Hines is often called upon to operate when other physicians or their family members are in need of complex abdominal surgery. He has authored over 200 scientific manuscripts and book chapters. As the Director of the General Surgery residency program at UCLA, Dr. Hines has overseen the training of a generation of young surgeons. He is a Director of the American Board of Surgery, a national organization responsible for the comprehensive certification of surgeons practicing in the United States.

Dr. Hines has been voted one of the Best Doctors in America.