Home / News / Don’t Give Up the Fight 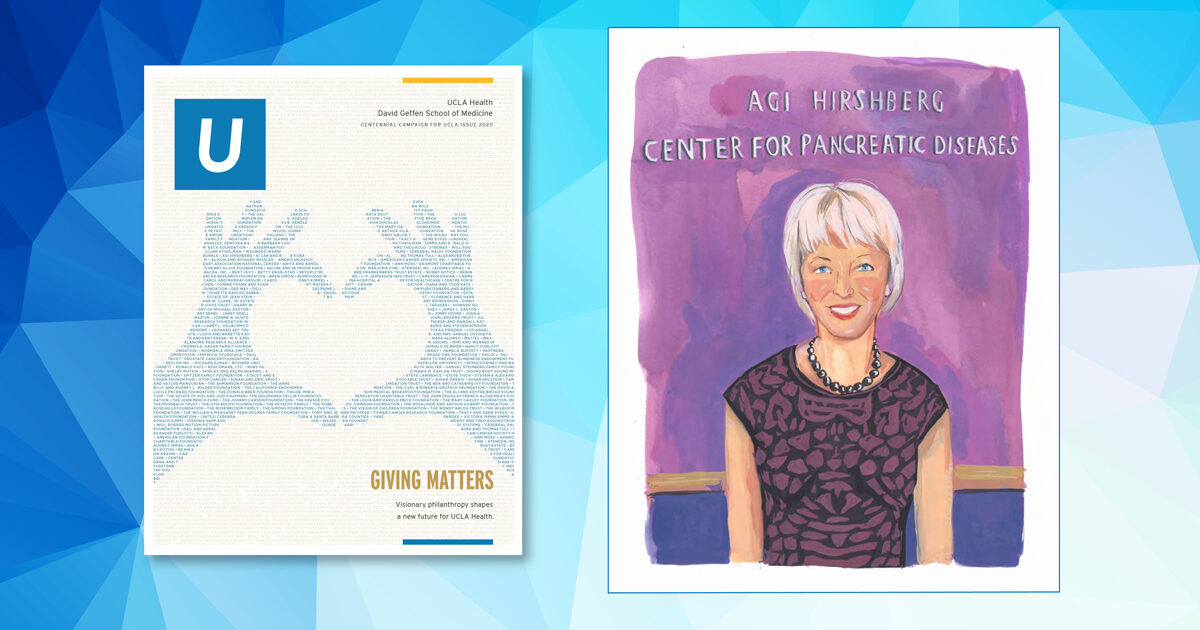 This article originally appeared in U Magazine, a publication of UCLA Health, David Geffen School of Medicine. The Centennial Campaign for UCLA Issue 2020’s theme was “Giving Matters – Visionary philanthropy shapes a new future for UCLA Health.” We are proud that our founder, Agi, is featured in a story about the Foundation’s commitment to never give up and the slow but steady progress towards a cure.

In the competitive wholesale apparel business, Agi and Ronald Hirshberg would implement a new business idea and give it 18 months to bear fruit. If it wasn’t successful, they would pull the plug and move on. After Ronald died of pancreatic cancer in 1997 at age 54, Hirshberg focused that same determination on the effort to find a cure for the ravaging illness that took her husband’s life. “I had that business mentality,” Hirshberg recalls. “You begin, build inventory and sell it. I figured I’d give a little donation, and 18 months later there would be a cure for pancreatic cancer.”

However, the world of medical research is vastly different than that of apparel, and the time it takes to reach a breakthrough is measured in years, not months. Patience and resolve are necessary to sustain the effort. More than two decades later, a cure for pancreatic cancer is closer but still not in hand.

Hirshberg never thought of abandoning the fight. Her philanthropy established the UCLA Agi Hirshberg Center for Pancreatic Diseases, one of the nation’s leading centers focused on the disease, and she has funded scores of research projects through the Hirshberg Foundation for Pancreatic Cancer Research. “I am pleased and happy we’ve helped so many patients, but I don’t have the satisfaction of finishing the job just yet,” she says. “With my business mindset, I can’t take credit until the job is done. But I do feel that, within the next five years, we’ll have an early detection test for pancreatic cancer.”

Pancreatic cancer is among the most devastating cancer diagnoses. About 57,000 Americans are diagnosed with the disease — often at a late stage — each year. The five-year survival rate is only nine percent, although the survival outlook for people diagnosed today is improving.

Agi and Ronald Hirshberg were in the small town of Portsmouth, N.H., when he became ill and was diagnosed with the disease. The couple returned to their home in Los Angeles and sought care at UCLA. Ronald had an inoperable tumor and, despite the best efforts of his physicians, he survived just eight months.

Hirshberg’s efforts have helped fuel tangible progress in improving the care of patients with pancreatic cancer. She was an early advocate of seed grants, money to fund high-risk, high-reward research projects needed to find new and creative ways to crack the mysteries surrounding the disease. That research has resulted in a much better understanding of the molecular processes that steer the disease, promising work on early detection and improved surgical and chemotherapeutic treatments.

In choosing to direct her philanthropy to UCLA, Hirshberg says she “picked the right partner.” The UCLA Agi Hirshberg Center for Pancreatic Diseases has set the highest bar for contemporary pancreatic cancer care. The center is home to an integrative-practice unit, a groundbreaking program that allows patients to receive an extensive evaluation and personalized treatment plan in one visit. “My determination never wavered,” she says. “What sustained me is that we kept going and improving. There were so many baby steps. I felt if we could not find an early detection test right this second, my next concern was the patient experience. Today, UCLA is one of the few integrative-practice units that provide the kind of services patients need, including the psychosocial portion that helps not only patients, but also caregivers.”

She says she is especially heartened by the efforts of top pancreatic cancer clinicians and researchers at UCLA and elsewhere who are collaborating to accelerate the pace of progress. And when it feels like things are still moving too slowly, she thinks about the annual LA Cancer Challenge, a run/walk held on the UCLA campus that benefits the Hirshberg Foundation for Pancreatic Cancer Research. The event reinvigorates her, Hirshberg says. “On that day, with all those people gathered who have the same wish as I do, I know our loved ones are up there watching,” she says. “Ronald and I were partners in life. We had pancreatic cancer together. We were fighting it together. Although he is gone, it has never occurred to me that I could stop.”