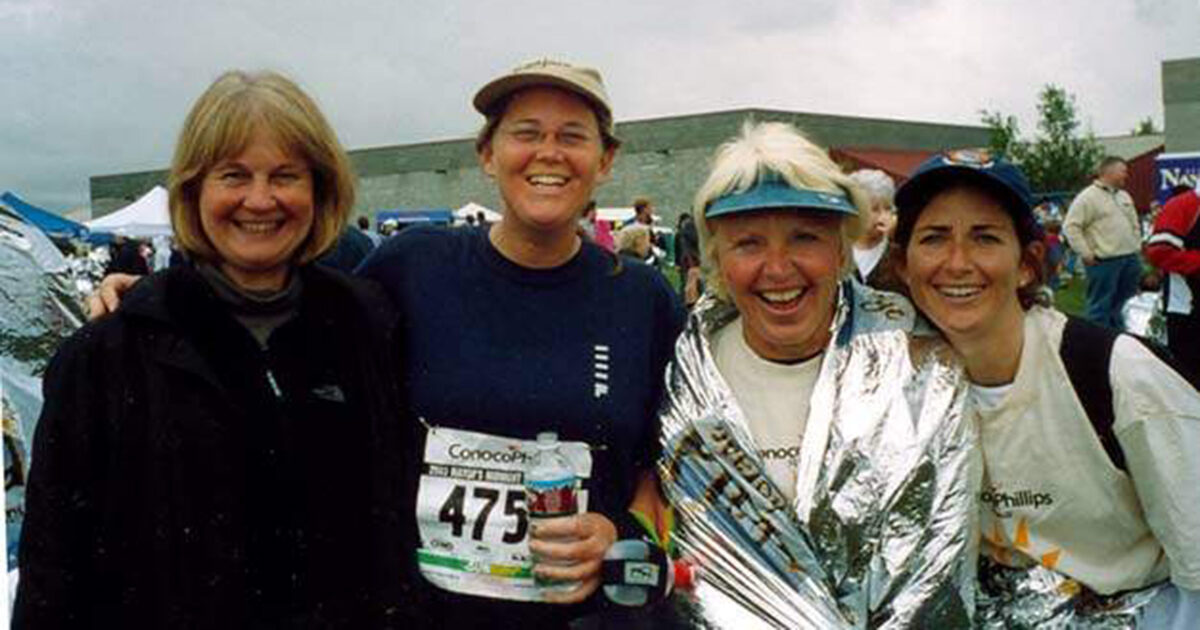 Nine members of the Hirshberg Foundation Marathon Team journeyed from Los Angeles to Alaska this past June to participate in the Mayor’s Midnight Sun Marathon and raised over $26,000 for the Foundation.

Each team member committed to raise at least $3,000 for the Foundation and in return received round trip airfare, four nights at a hotel, and entry into the Marathon. They were also treated to a pre-race pasta party at the Anchorage Museum of Art and a celebration dinner after the race.

Hirshberg Foundation Director Lisa Manheim noted that the marathoners raised money in a variety of different ways. Michelle Eskenazi, who participated in last year’s Kona Marathon, participated with her friend Ernae Mothershed, to organize Art for Life, an art auction and boutique. Ernae, who was the top pledge earner with over $5,000 in donations, also hosted a Cajun Dinner Party, while Michelle held a yard sale, gathering contributions from friends and co-workers. Kari Richardson, an architect from Venice, hosted a birthday dinner party at her home and asked her friends for donations in lieu of gifts. She also donated her car through the Foundation’s Car Donation Program. Other team members conducted successful letter-writing campaigns.

Everyone was invited to participate in a 21-week training program held on Saturday mornings in Marina del Rey by Robert Mills, one of the area’s premiere marathon training coaches and Director of Club 26.2. Prior to Alaska, only one team member had ever participated in a long-distance running event. In fact, most of the team had never run at all. Yet, the eight half-marathoners and one marathoner on the team all successfully completed the race.

During a marathon, many runners get so tired they feel they can’t even put one foot in front of another anymore. This urge to stop running is known as “hitting the wall.” Team member Amy Reiss, whose mother lost her battle with pancreatic cancer on June 28, 2002, exactly 51 weeks prior to the start of the race, explains why this wasn’t a problem in Alaska.

“On the bus on our way to the starting line, I felt my mom’s presence. She didn’t just show up casually, her energy was everywhere. It happened suddenly and dramatically, and I found myself moved to tears. Even though I had done the training with Robert, I worried that I wouldn’t have the strength to complete the half marathon. But once we started running I realized that feeling her all around me actually gave me the energy I needed.”

Other runners received their inspiration from a more natural, but no less extraordinary source. Hirshberg Foundation Director Lisa Manheim recalls what happened.

“We were running on a picturesque coastal trail, thick with lush green trees, when my mom, Agi, who was running a few paces behind us, yelled out, “Lisa, a moose!” Sure enough, there was a huge moose staring at us from about 20 feet away. We all stropped and stared, hardly believing that we were actually in the presence of such an incredible creature.”

“My mom said laughing at that moose was the highlight of the day. ‘Maybe they (all of the people for whom we were running in memory of) sent the moose, to let us know they were up there, cheering us on,’ she told me. I think she’s right. That’s just the sort of thing my stepdad would do.”