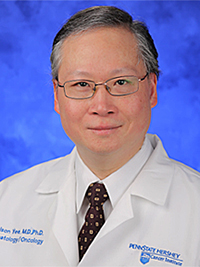 The mortality rate of pancreatic cancer is among the highest among all human malignancies, and treatment is mostly palliative except for patients with localized tumor that can be resected with a curable intent. Even following surgical resection, the rate of tumor recurrence either locally or as distant metastasis is frequently high. Molecular biomarkers for early detection of tumor recurrence following surgical resection will facilitate prompt treatment and improve patient survival. However, there is no sensitive and specific method or biomarkers for detecting tumor recurrence. Nanoscale extracellular vesicles (nEVs) contain proteins and nucleic acids, which can reflect disease status. Hence, we hypothesize nEV cargo proteins and nucleic acids could sensitively detect early recurrence of pancreatic cancer. In our previous study, we developed a lipid nanoprobe (LNP) system for rapid and efficient nEV isolation and performed subsequent nEV cargo analyses. The LNP system overcomes low throughput, low purity and other common shortcomings in nEV isolation, showing great potential for clinical use. This proposed research aims to use the LNP system to analyze several key proteins and genetic mutation and to evaluate these molecules as biomarkers of pancreatic cancer recurrence. The validation of this hypothesis will demonstrate the potential of nEV cargo as a promising tool to track evolution of PDA and monitor tumor dynamics with the goal of improving survival of patients.