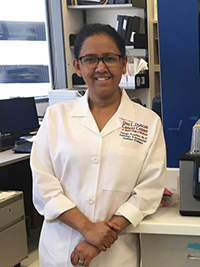 Pancreatic cancer is a deadly disease with very poor survival. New combination treatment options are needed to treat this aggressive cancer. CAR-T cell therapy (Chimeric Antigen-receptor-T cell therapy) is a novel treatment that has been successful in treating some of the aggressive blood cancers, but so far very limited success was achieved against pancreatic cancer. We have previously identified a specific population of immune cells called cytotoxic T cells with high memory capacity as candidates for CAR-T cell therapy against pancreatic cancer. In our preclinical studies, mice harboring pancreatic tumors were treated with cytotoxic CAR-T cells and compared with mice that were treated with standard CAR-T cells. Cytotoxic CAR-T cells not only killed the tumors faster, but improved survival compared to the regular CAR-T cells. However, pancreatic tumors are very dense and fibrotic and often prevent immune cells from reaching the tumors. In the current proposal, we aim to combine the CAR-T cells with agents that will make the tumor less fibrotic and more favorable for CAR-T cell penetration. Proglumide is one such agent that has been shown to reduce fibrosis in pancreatic tumors in the past. It has been also shown that proglumide is safe and when used in combination with other treatments, controls tumor burden and improves survival. Therefore, we hope that combining proglumide treatment with highly cytotoxic CAR-T cells will make the tumors less fibrotic, thus more immune cells infiltrate, eventually suppressing the metastasis and improving the overall survival with this novel combination therapy against pancreatic cancer.