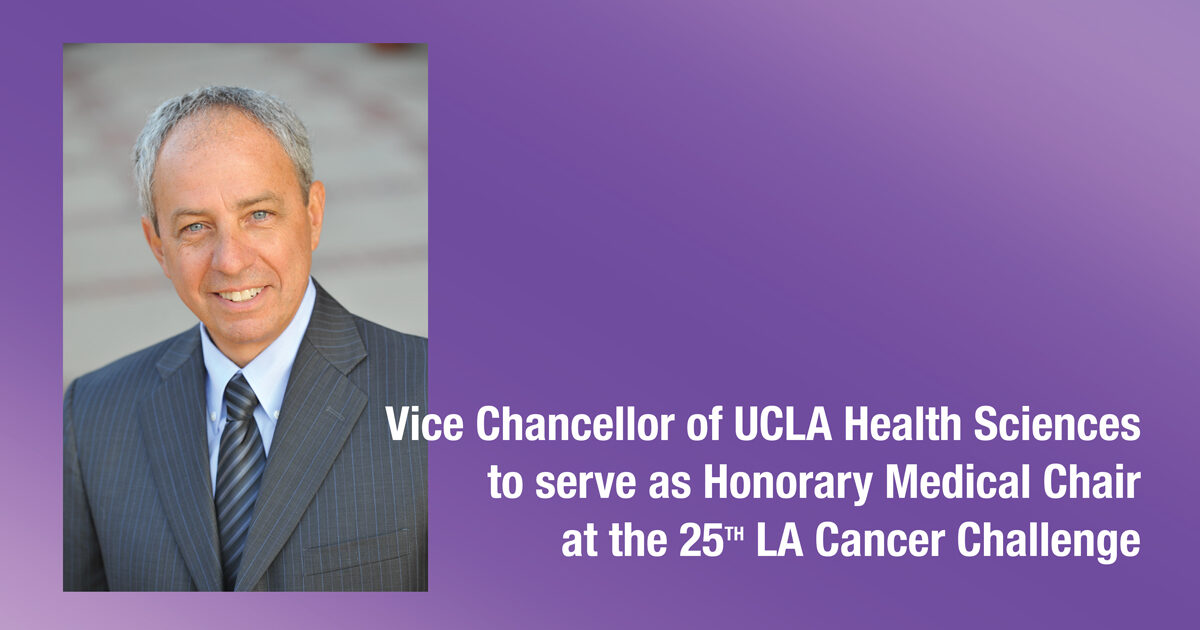 As the Hirshberg Foundation and the LA Cancer Challenge commemorate 25 years of advancing research and providing patient services for the pancreatic cancer community, we are grateful to partner with UCLA Health and welcome Dr. John C. Mazziotta as our Honorary Medical Chair.

When the Hirshberg Foundation was established in July of 1997, it was in partnership with doctors and researchers at UCLA. The Ronald S. Hirshberg Translational Pancreatic Cancer Research Laboratory was opened shortly thereafter in February 1998. The Hirshberg research centers at UCLA have grown to include three laboratories that collaborate amongst each other and with the UCLA Agi Hirshberg Center for Pancreatic Cancer Diseases. This deep partnership with UCLA is why it is such a distinct honor to recognize Dr. John Mazziotta and have him leading the UCLA Health team at the 25th LA Cancer Challenge.

“I look forward to marking 25 years of fighting towards a cure with my friend Dr. Mazziotta by our side. It is an honor to have him participating in the LA Cancer Challenge,” said Agi Hirshberg, Founder and President of the Hirshberg Foundation.

In reply to our invitation, Dr. Mazziotta wrote, “I have long admired and commend the work of the Hirshberg Foundation. Their partnership has helped establish UCLA as a premiere pancreatic cancer center and we are deeply grateful for their longstanding support. It is a true privilege to be the Honorary Medical Chair for this landmark year of the LA Cancer Challenge. I look forward to leading our UCLA Health team, see you there!”

“We have made such progress and I am confident that our momentum and hard work will carry us to the finish: a cure! I have happy tears just thinking about all the hugs and faces I will see at this year’s event,” said Agi Hirshberg. Join Agi, Dr. Mazziotta and the pancreatic cancer community at the 25th LA Cancer Challenge on October 23rd at UCLA.

Dr. Mazziotta earned his MD and PhD in neuroanatomy and computer science from Georgetown University. Following an internship at Georgetown, he completed neurology and nuclear medicine training at UCLA.

Dr. Mazziotta has published more than 260 research papers and eight texts. He has received numerous awards and honors, including the Oldendorf Award from the American Society of Neuroimaging, the S. Weir Mitchell Award and the Wartenberg Prize of the American Academy of Neurology, and the Von Hevesy Prize from the International Society of Nuclear Medicine. Dr. Mazziotta has been elected to the National Academy of Medicine and the Royal College of Physicians.