Home / About the Foundation / About Us / Scientific Advisory Board / Anirban Maitra, MBBS 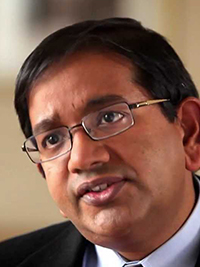 Dr. Maitra is Professor of Pathology and Translational Molecular Pathology at UT MD Anderson Cancer Center, and Scientific Director of the Sheikh Ahmed Bin Zayed Center for Pancreatic Cancer Research (since August 1, 2013). Over the past decade, his group has made several seminal observations in the biology and genetics of pancreatic cancer. His laboratory has access to large numbers of well annotated samples of pancreatic adenocarcinomas and precursor lesions, as well as human patient derived xenograft models. He also has extensive expertise with genetically engineered mouse models of pancreatic cancer, and with experimental therapeutics and drug development for this disease.