Home / About the Foundation / About Us / Scientific Advisory Board / Miklos Sahin-Toth, MD, PhD 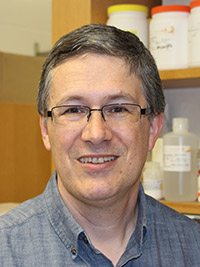 Dr. Miklos Sahin-Toth is a world-renowned expert in the area of the pancreas disorders with a focus on genetic risk factors in chronic pancreatitis. His studies combine biochemical, cell biological and animal model approaches with data obtained from human genetic association studies to formulate molecular disease models that explain genetic susceptibility to chronic pancreatitis. Dr. Sahin-Toth earned an M.D. and a Ph.D. in Medical Sciences from Semmelweis University of Medicine, Budapest, Hungary in 1988 and 1994, respectively. He received post-doctoral training at the University of California, Los Angeles, and The Scripps Research Institute, La Jolla, California. Dr. Sahin-Toth joined the faculty of Boston University as an Assistant Professor of Molecular & Cell Biology in 2002. In 2006, he was promoted to Associate Professor and in 2009 to Professor. In 2019, he moved his laboratory to the Department of Surgery, David Geffen School of Medicine, University of California Los Angeles. Dr. Sahin-Toth has been exceptionally successful in his research, having published more than 150 peer-reviewed papers, many of which in high-profile journals, including Nature Genetics, Nature Communications, Gastroenterology, Gut and the Proceedings of the National Academy of Sciences, USA. In addition, Dr. Sahin-Toth administers several major federal grants to study various aspects of pancreatitis. He also serves as co-editor-in-chief for the journal Pancreatology, and he is a past member of the Clinical, Integrative and Molecular Gastroenterology study section of the National Institutes of Health. Dr. Sahin-Toth has received many awards and honors, including the Henry Lynch Lifetime Achievement Award from the International Symposium for the Inherited Diseases of the Pancreas in 2012. He also served as a council member for the American Pancreatic Association and he was president of the organization in 2017.