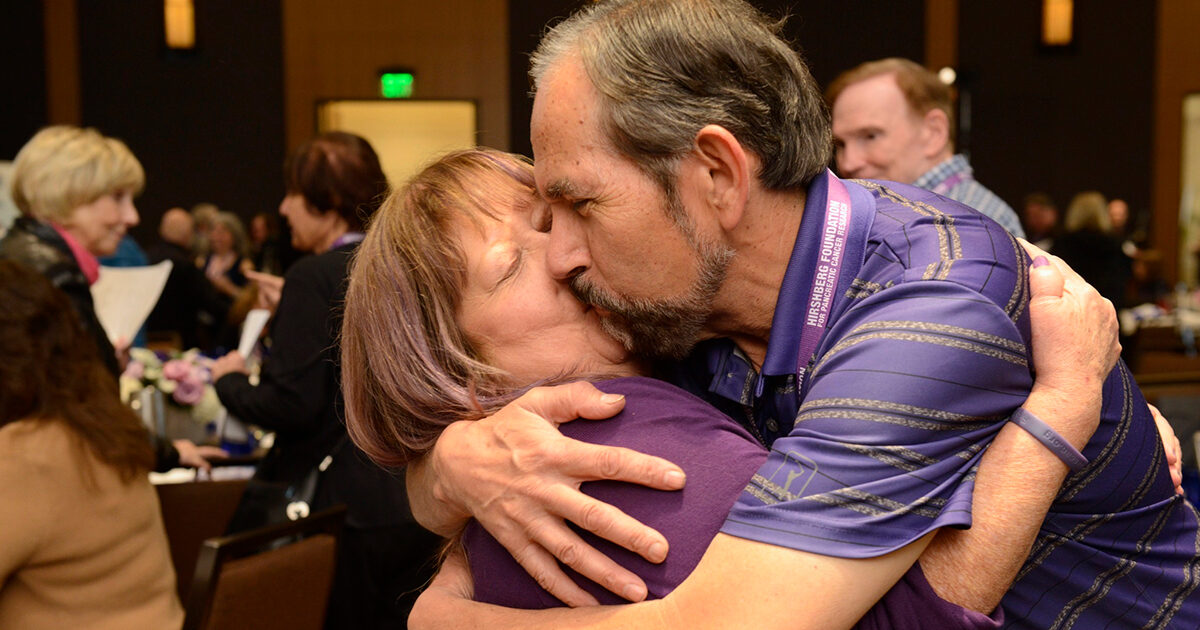 I am a wife, a mother, a bit of a thrill-seeker, an advocate, a volunteer and as of April 1, 2021, a nineteen-year pancreatic cancer survivor, with an inoperable tumor due to artery & vein involvement.

My journey with pancreatic cancer began in 1964 when I was only 9 years old. I was not yet old enough to know anything about the cancer that stole my grandmother from me that year. I was too young to imagine that the same disease would turn my life upside down again more than 30 years later and would eventually steal my father, my mother, my uncle and in time, my own good health.

In 1998, we were preparing for our oldest son’s graduation from UC Berkeley when we were hit with the news that my father had pancreatic cancer. I can’t remember my father ever being sick a day in his life. He never complained about not feeling well, he never missed a day of work, never so much as taken an aspirin. To hear the words “I’m sorry…. it’s pancreatic cancer… there is nothing we can do…. go home and put your father’s house in order,” shocked us. Less than 2 weeks later, my father died. At his memorial, I was stunned to learn his mother, my grandmother had also died from pancreatic cancer.

After hearing, what I thought could be a family history of pancreatic cancer, I asked my doctor if I should be concerned, what symptoms should I watch for. His reply was a simple, “Don’t worry hon, you’re too young, and it isn’t hereditary.”

Still reeling from the sudden death of my father, we were trying to find a new “normal” and couldn’t imagine another loss, let alone to the same disease. But just a few years later, in January of 2002, I lost my favorite uncle, my father’s baby brother, to pancreatic cancer.

Like my father he never complained about not feeling well. We had noticed he had lost some weight. When we questioned him, his reply was that he needed to lose a few pounds any way and was not worried about it. Finally, after much insisting, he begrudgingly went to the doctor. I remember the day he called me to say, “hi squirt, sorry to tell you but it’s pancreatic cancer and they’re telling me to put my house in order.” He died two weeks after he was diagnosed.

Losing a third family member I was really concerned. Again, I approached my doctor and again was told, “don’t worry, you’re too young and it isn’t hereditary.

I began having vague symptoms in November 2001. I was unable to keep any food or water down, had bouts of diarrhea and weight loss. My symptoms went on for too long to be the flu.  My doctor’s next thought was that I was pregnant. I’d been pregnant before and I had never suffered from diarrhea, so I suggested he reconsider. The next guess was, “well, it’s probably your gallbladder.” I laughed and gently reminded him that he had removed it many years earlier.

My doctor seemed genuinely baffled, but his next suggestion was, “let’s just wait and see what happens.” Anyone who knows me knows I’m not the wait-and-see-what-happens type of person. I pulled out my checkbook, signed a blank check, and strongly requested we look at the pancreas. After finally agreeing to investigate further, they ran what seemed like an endless number of tests, blood, urine, stool, ultrasounds, MRI’s, EUS, and ending with a needle biopsy.

On April 1, 2002, my doctor called and asked me to come in to go over the results. I think I knew what he was going to say even before he said it. With his eyes looking down at the floor, I knew what was coming next. “I’m sorry, it’s pancreatic cancer and, as you have seen within your own family, no one survives this disease. You need to go home and put your house in order. However, let us start treatment as soon as possible to give you some extra months.” The rest of the visit is pretty much a blur. I don’t remember walking out of the office or how I got to my car.

The next memory I have is Bob Marley singing
“This is my message to you-ou-ou,
Singing don’t worry about a thing
‘cause every little thing gonna be alright.”

I know he wasn’t really singing to me but at that moment he was. I decided then and there I wasn’t going to die, I was going to fight this with everything I had.

During my third year of treatment, the cruel hands of fate dealt our family another heartbreaking blow with my mother’s diagnosis in 2005. My mother also defied the odds, surviving eight years before she died of the same disease that took so many family members. It is never easy to lose a loved one, but to have pancreatic cancer keep coming for our family seemed so unfair.

Pancreatic cancer impacts the entire family. My husband Vic, and I met and fell in love when I was only 15 and we married when I turned 18. When you are young and healthy and you promise to stay by each other “in sickness and in health” I don’t think you really give much thought to the meaning – until you’re forced to.

I started chemotherapy within the same week that I received the diagnosis. I sought a second opinion to confirm the diagnosis, hoping to hear the first was wrong but of course that was not the case. Radiation was added to the treatment regimen after the second opinion confirmed it was indeed pancreatic cancer. Through the years, I have been on many different chemotherapy regimens, and Vic has been by my side through them all. “In sickness and in health” is a promise that we continue to make to each other every day.

We tend to put off doing things we want to do when we are not facing life-threatening situations because we think there is plenty of time down the road to do these things. I too was guilty of this until I was faced with this deadly illness. Since my diagnosis, I completed my first half marathon, got a tattoo, jumped numerous times from a “not so perfectly good airplane” each time recruiting new people to the mix. Fellow survivors, my husband, son, friends, family, students from a local university, even a PanCAN and Hirshberg staff members. My ultimate goal is to get the founders of the Hirshberg Foundation (Agi Hirshberg ) and PanCAN (Pamela Acosta Marquardt) to jump with me!

Mark Twain said, “the two most important days in your life are the day you are born and the day you find out why.” Through my experience with this horrific disease, I believe I am here to help those who have also been affected by pancreatic cancer, to hopefully inspire them and give them much needed hope. I share my story with members of Congress, advocating for the allocation of more funding for pancreatic cancer research, served on a Survivor Council for six years and I currently serve as a Patient Research Advocate.

Vic and I have recently been given a great opportunity to take another leap of faith and embark on a new journey with OC Talk Radio. We have created the podcast and radio show, Living Hope; Your Journey with Pancreatic Cancer. The OC Talk Radio platform gives us the power of podcasting with online live radio and video. We hope this latest endeavor will allow us to share the journey of anyone touched and affected by pancreatic cancer and how they face it daily. We want to educate, bring awareness, give hope and inspiration to our audience.

Hopefully, you find inspiration from my story about how, through the good, the bad and the ugly, we can weather the storm with the support of our loved ones, our family, “our purple family” and the many people we meet along this often-difficult journey.

As I lace up my purple boxing gloves for the 19th time, I challenge pancreatic cancer to put on it’s gloves and prepare for the next round.

We’re on round 19 and while I may be a little wobbly, I am still standing and I’m not giving up!