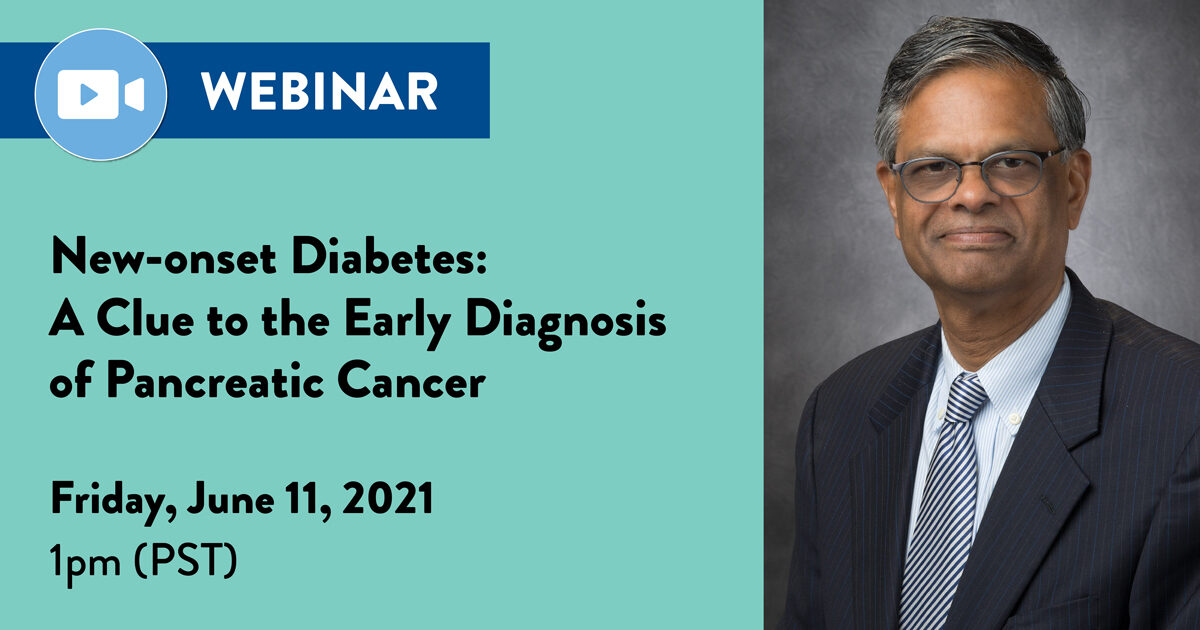 Dr. Suresh T. Chari, Professor of Medicine with The University of Texas MD Anderson Cancer Center and Fellow of the American College of Gastroenterology (FACG), will join our Patient and Family Webinar Series to discuss pancreatic cancer and new-onset diabetes. Suresh T. Chari, MD, will address the history of the link between diabetes and pancreatic cancer and the newest advances taking place to use diabetes as an early detection tool.

The relationship between diabetes mellitus, commonly known as type 2 diabetes, and pancreatic cancer has been known for over 150 years, yet it is still not fully understood. Diabetes is a disease that occurs when blood sugar, or blood glucose, levels are too high. Insulin, a key hormone produced by the pancreas, helps regulate blood sugar levels by carrying sugar into cells and lowering the amount of sugar in the bloodstream. In prediabetes and diabetes mellitus (type 2), cells become resistant to insulin and the pancreas is unable to produce enough insulin to compensate for the insulin resistance. Rather than being transported into the cells where it is needed for energy, sugar builds up in the bloodstream.

It has taken nearly 200 years since the first observation that diabetes occurs in pancreatic ductal adenocarcinoma (PDAC) patients to use this correlation as a diagnostic tool. We are now close to using this observation to detect pancreatic cancer early.

Suresh T. Chari, M.D. is a Professor of Medicine with The University of Texas MD Anderson Cancer Center. Dr. Chari is a gastroenterologist clinician-investigator with an interest in pancreatic diseases. From 1999 through 2019, he was a faculty member at Mayo Clinic, Rochester. He led Mayo’s Pancreas Interest Group and was Director of the Pancreas Clinic, the primary entry point for all patients with benign and malignant pancreatic diseases. His research work, funded by NIH since 2003, focuses on early detection of sporadic pancreatic cancer in subjects with new-onset diabetes.

Foundational work from Dr. Chari’s group led NCI to recognize the study of diabetes as a top priority for pancreatic cancer research. As a result, a U01 Consortium to study this relationship, Consortium for Study of Chronic Pancreatitis, Diabetes and Pancreatic Cancer (CPDPC), was established up in 2015. In the first funding cycle of CPDPC, Dr. Chari was the site Principal Investigator of Mayo Clinic’s Clinical Center. Since moving to MD Anderson Cancer Center a year ago, Dr. Chari and Dr. Anirban Maitra have successfully completed the renewal of the CPDPC as a Clinical Center in collaboration with Ochsner Clinic in Louisiana. Drs. Chari and Maitra and he are now Co-Principal Investigators of the Diabetes-Pancreatic Cancer Working Group within the CPDPC overseeing the assembly of a New-Onset Diabetes (NOD) Cohort.