Home / About the Foundation / About Us / Scientific Advisory Board / Suresh T. Chari, M.D. 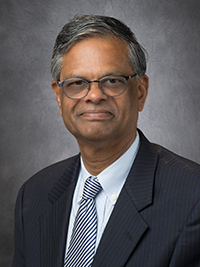 Suresh T. Chari, M.D. is a Professor of Medicine with The University of Texas MD Anderson Cancer Center. Dr. Chari is a gastroenterologist clinician-investigator with an interest in pancreatic diseases. From 1999 through 2019, he was a faculty member at Mayo Clinic, Rochester. He led Mayo’s Pancreas Interest Group and was Director of the Pancreas Clinic, the primary entry point for all patients with benign and malignant pancreatic diseases. His research work, funded by NIH since 2003, focuses on early detection of sporadic pancreatic cancer in subjects with new-onset diabetes. Foundational work from Dr. Chari’s group led NCI to recognize the study of diabetes as a top priority for pancreatic cancer research. As a result, a U01 Consortium to study this relationship, Consortium for Study of Chronic Pancreatitis, Diabetes and Pancreatic Cancer (CPDPC), was established up in 2015.  In the first funding cycle of CPDPC, Dr. Chari was the site Principal Investigator of Mayo Clinic’s Clinical Center. Since moving to MD Anderson Cancer Center a year ago, Dr. Chari and Dr. Anirban Maitra have successfully completed the renewal of the CPDPC as a Clinical Center in collaboration with Ochsner Clinic in Louisiana. Drs. Chari and Maitra and he are now Co-Principal Investigators of the Diabetes-Pancreatic Cancer Working Group within the CPDPC overseeing the assembly of a New-Onset Diabetes (NOD) Cohort.

Dr. Chari assists many pancreatic cancer organizations as a member of the Scientific Advisory Board, including the Kenner Family Research Fund dedicated to early diagnosis of pancreatic cancer, the Pancreatic Cancer Action Network, and the Hirshberg Foundation. In October 2020, he co-organized a “think tank” virtual meeting to develop a white paper on the role of artificial intelligence in early detection of pancreatic cancer. Dr. Chari is a member of the Steering Committee of the Early Detection Initiative, a collaborative effort among NCI, Pancreatic Cancer Action Network and CPDPC to launch a national randomized control trial for early detection of sporadic pancreatic cancer. He has also started to build a clinical research program in pancreatic diseases at MDACC at the Woodlands’ location.

Dr. Chari is Co-Editor-in-Chief of Pancreatology. He was tasked with making it the premier journal for articles relating pancreatic health and disease. The journal has seen a significant rise in its impact factor. He serves as a member of the Advisory Panel of the Pancreas section of Digestive Disease Week, a world-renowned conference. Dr. Chari is also a mentor for the National Pancreas Foundation which fosters academic interest in diseases of the pancreas among trainees and junior faculty.